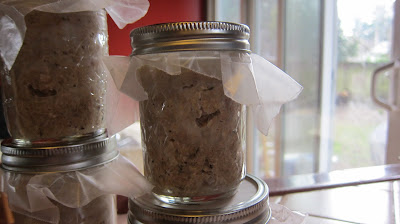 A few weeks ago I met up with Laura and John, my partners in La Musette, to discuss the its future and each individual's participation. I went into the meeting determined to politely decline from this year's event. Why? I don't really know, call it a deep fear of commitment. Last year's Musette was exhausting but exhilarating and even a little profitable. But now that I don't even have a fraction of a foot in the restaurant industry anymore, the challenge of putting together a 2-day French restaurant and getting it right feels like it should belong to someone else. But only 10 ounces of beer into our discussion I could already feel my will caving as we broached: "if we were going to do this again this summer, what I would change is..." and just like that, I've placed myself on board for the weekend of July 23-24, serving up 6 courses with wine pairings, a tour of France a la Tour de France, at Grochau Cellars in Northwest Portland.
Getting started almost 2 months earlier than last year feels good; so does committing to two nights instead of 3. Now begins the phase of designing and testing out the menu. Today I made a batch of pork rillettes for our stop in the Loire Valley. Rillettes is, if you are too lazy to click on the link, meat that has been cooked sloooowly in fat, shredded, seasoned, and fortified with some of that fat to render it a decadent spread for crusty bread and a friend to cornichons and other zesty pickles. My recipe, an amalgam of a few, called for almost equal parts pork belly, pork shoulder, and homemade lard: the widowmaker special. Chopped into 2-inch pieces and assembled in a pot with thyme, bay leaves and a little water, they cooked for about 5 hours. 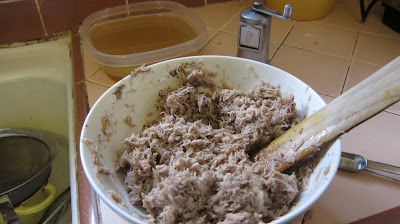 When sufficiently melted, the solids took a VERY brief spin in the cuisinart with a dull blade I've been saving for this very occasion. Salt, pepper and secret seasonings (nutmeg, clove, allspice and ginger, in the smallest proportions) were mixed, a little of the fat was added back, and a little more fat topped off the jars, for preservation. The rest of the fat is back in the freezer and will go into my next batch, and like a dough starter or vinegar mother, I think it will only get better.
Posted by Robin at 6:32 PM