A Behind the Scenes Look at Thanksgiving 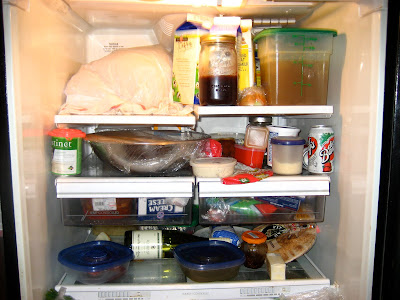 It would be nice to have the ability to tag each item in the picture, maybe for another blog though. Here, we see my refrigerator the morning of thanksgiving. Not pictured, the side door, which almost every condiment known to man. Also not pictured is the large branch of brussels sprouts that are sitting on top of my chest freezer in the garage. Top left, nestled in a (food safe) plastic bag is our dry-brined turkey, rubbed with just salt and a little trifecta of spice I decided to throw in at the last minute: smoked paprika, cumin and caraway seed. Below that is a large bowl of pumpkin pie filling, enough for 2 pies (one goes to my temporary roommate and the Thanksgiving dinner he's attending). We've got, to the right of the turkey, a jar of cranberry sauce I pilfered off of a friend at work. He brags about the same recipe he's been canning and gifting for the last decade. This was the year he decided not to make a production of it, but unfortunately for him, the cranberry sauce I made tastes like shit so I hunted him down for some. He gets pickled carrots, it's a fair trade. To the right of that is the turkey stock made from necks and wings I bought on Sunday.
There is some wine for cooking, some chicken stock, and of course butter, but most everything else for the meal is either sitting out on the counter or in the vegetable bins. This is a good opportunity to point out that can of Diet Barq's Root Beer. I'm pretty sure it's been there since the summer of 2007. Summer party, sober and dieting friend brought her own beverages. I keep it around thinking that the next time she's here, I can proudly present her with it, so she can drink something other than water. But she always brings her own drinks here anyway. Maybe it's time to let it go. But then again, I wonder how long I can hold onto this can of diet root beer and what it will taste like 10 years from now, after I have purchased a new refrigerator and moved houses and possibly states.
Posted by Robin at 8:04 AM No comments:

Thanksgiving: My Super Bowl.
At the risk of alienating my 2 readers, there is only one decent holiday that I can get behind, and that is Thanksgiving. Not because it's a day of gluttony, or not just because it's a day of gluttony. Because it's a day of feasting and relaxing and warmth during a miserable time of the year. A single moment of respite before the Spirit of Christmas vomits poinsettia and tinsel and aggressive marketing over the entire world.
I hosted my first Thanksgiving when I was 17 years old and a senior in high school. My parents were on a trip to Israel to visit my sister and also to decide if they wanted to stay married (they didn't). I invited 7 friends and put out the whole spread--I was also a vegetarian at the time and extremely proud of myself for sacrificing my principles for the greater good of my guests and the great tradition of Thanksgiving by preparing my first turkey, with giblet gravy. That was...gulp, 20 years ago. Since then, I have probably hosted a solid 15 Thanksgiving dinners, though I would have a hard time differentiating many. There was the year my roommate and I cooked for 30 people. There was the year I never put on pants (drunk by 3, I wore tights and an oversized crushed velvet shirt, ok?). There was the year we all made crowns out of construction paper and pipe cleaners. There was the one year, out of 20, that I flew home to my family in Connecticut and had to prepare a kosher meal for my sister and her boyfriend. That means no butter. On Thanksgiving.
There were a few Thankgiving meals built around impressing some momentary crush, and when I was in a relationship there were several successful years of teamwork that made our table a highly coveted invitation. But you know what? It does get old. After hosting a party of 14 on my own last year, I found myself embattled with guilt and resentment. Guilt for not inviting my ex, resentment towards my guests who were supposed to assuage my guilt. The ones who came early, the ones who came late. The ones who brought exactly what I asked them to bring and more and did the dishes but failed to put the pots back in the right place. I caught Hostess Fatigue, a big dose of tryptophan for my patience, and I haven't quite recovered.
My best friend Heather, who was at a majority of the last 15 years worth of Thanksgivings, flies out to Portland tomorrow while her boyfriend drives up from San Francisco. This year, rather than signing up for indignation, I'm keeping it to a comfortable party of three. Normally, I am creating excel spreadsheets in September with columns for smoked seafood to dessert wines. I was thinking of foregoing the turkey altogether for nachos and white russians, but my conscience wouldn't allow it. Instead, I ordered the smallest bird from New Seasons, decided on some sides, and rolled out a pie crust. This year's menu took me an evening in front of the TV. I'll wake up early enough on Thursday to jog in Forest Park. Active cooking time will be under 2 hours, which feels sacrilege. But also unencumbered, which I could get used to.
Posted by Robin at 8:36 PM No comments: 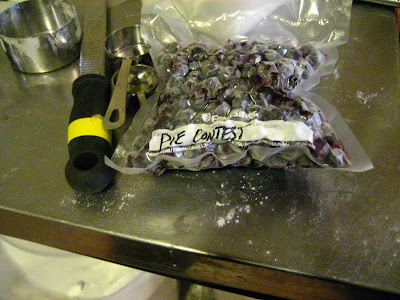 Way back in July, my buddy Julia Oh and I went on an a U-Pick frenzy. Most of the bounty was put up in the form of preserves, but a smaller amount was selected for one specific purpose, to win victory in this year's pie contest at work. In fact, I will freely admit on this blog that I was picking the berries that were to be later frozen, vacuum sealed and labeled "pie contest", I was rehearsing my acceptance speech in my head:
"Wow. WOW! I wasn't sure I would ever be up here, accepting this. I have so many people to thank for this victory, especially Dawn Weeman, who, in my first year here at W+k, singled out my cranberry nut pie as an underbaked failure. Dawn, I have spent the last 730 days training for this moment etc...etc..."
But it's probably bad luck to start planning your acceptance speech in July. Especially for something as arbitrary as a pie contest judged by your work peers. This is the reality of the annual Wieden & Kennedy Pie Contest. It is why a cheesecake won last year. It is why this year's "wildcard" category has something to do with Voodoo Doughnuts. So, I started thinking about this. I have one, and only one, bag of vacuum sealed frozen blueberries, handpicked out in Oregon City, in my possession. Do I really want to offer them as a sacrifice to the remote possibility that my pie happens to defy the odds? Blueberry is my favorite pie flavor. And there is this one bag. And the judging is arbitrary. And Thanksgiving is coming. And what? I'm going to make my favorite pie and not even get the opportunity to enjoy it? Is it better to be selfish about your precious fruit or passive-aggressively sacrifice something important to you for the sake of winning? What does one do?
So, though still "on the fence," I've pretty much decided to save the blueberries for Thanksgiving and go forth with a more-or-less classic apple pie. And, there will be a wild card of my own: Kathleen Williams' Lemon Butter Crunch Chiffon Pie, which, though no less worthy than my precious blueberries, will inevitably be the sacrificial lamb.
Posted by Robin at 9:29 PM No comments: