One of the fun things about my job is that occasionally I get to organize parties for the Creative Department and put 15 years of restaurant and catering experience to good use. The agency is growing, and with so many new hires in the last year we needed to throw a mixer. On a recent rainy afternoon I was craving hot fudge and thought an ice cream social would be a good excuse to construct the ultimate sundae bar.
I counted on a 60% turn out of about 100 people, but I was not factoring in a 78 degree afternoon and my co-workers' insatiable thirst for liquor when I decided to make 6 quarts of salted caramel sauce, in addition to suppling hot fudge, marshmallow sauce, pineapple and strawberry sauces, oreo and reese's bits, nuts, fruit loops and whipped cream. I'm not sure if anyone was as excited about the sundae bar as me, which is why I ended up bringing 4 of the six quarts of salted caramel sauce home to my fridge.
If I wasn't worried about how much of this I will end up consuming with nothing but a spoon and Real Housewives marathon, I would be excited for the challenge to use up these 4 quarts, 16 cups, 128 oz of this amalgam of burnt sugar, cream and grey sea salt. Well a challenge is a challenge. Stay tuned. 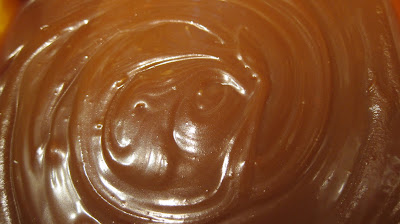 This weekend I went camping, for the first time in maybe 5 years. As with many activities that require some forethought, it's easy to talk yourself out of going. There's always a social event or house project to talk you out of the planning and packing that going camping requires. And part of the hesitation is remembering how great it is to be out of cities and towns and in the middle of a forest or desert with no wifi or phone service, but rueing the fact that there's just not enough time in life to do this enough.
So the first really nice weekend of the year, my friend Jim turned 45 and 9 of us went to the Indian Henry Campground in the Mt Hood National Forest, exactly an hour's drive from my house. I brought a borrowed tent, a sleeping bag, a folding chair, some food, beers and Victor. They had arrived the night before but I had to stay in town for a work event. I missed the big hike that morning, but shortly after I arrived we walked to a beautiful bluff overlooking a swimming hole on the Clackamas River. 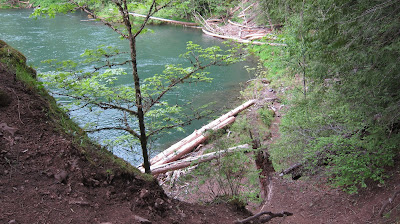 Eating while camping is always the best part, whether it's preparing fancy food in a rustic setting, or an excuse to eat the garbage you normally wouldn't buy. For dinner, we made toasted sandwiches, an ingenious invention of Jim's wife Jessica. This river of plastic (sad) represents about 20 different ingredients that we had to choose from to stuff rustic rolls from Little t Bakery. I brought some leftover brisket and chicken liver pate, but kept my own roll pretty simple with a variety of cheeses and brined cherry peppers. 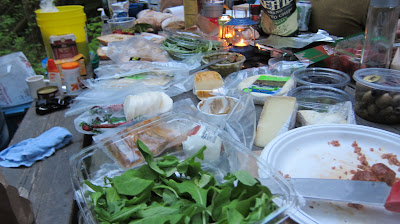 Then they get wrapped in foil and thrown on the grill above the campfire. 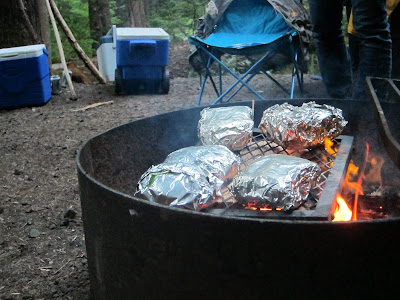 Dessert was a decadent chocolate-orange birthday cake that Jess made for Jim. 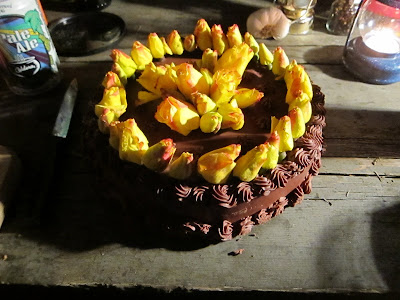 The next morning, Jim, who roasts beans for Stumptown, prepared our coffee with the type of attentive precision you would expect from a group of car-campers from Portland. I made a scramble with onions, tomatoes, smoked mozzarella and saucisson d'alsace from Olympic Provisions. 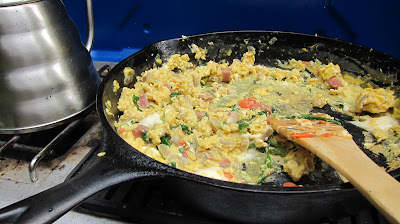 Before I left Portland, I made hobo-packs for the morning campfire of red potatoes, onions, rosemary, olive oil and a touch of vermouth. Then topped with some mild chevre after they came off the fire. 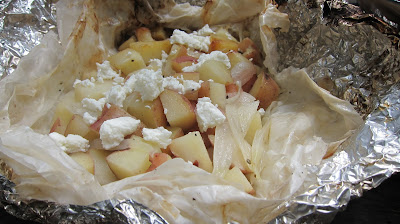 Now, my only complaint is that I don't know when the next time I'll have a chance to pursue more campfire cooking.
Posted by Robin at 6:05 PM 13 comments: 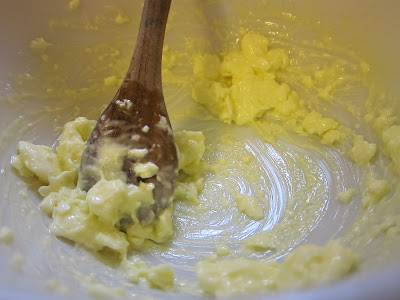 I took this one awhile ago, it was the base of some salmon rillettes. I've been a bad blogger lately but when I see a photo like this I remember that this is merely an ongoing jornal/photo album about my eating/cooking habits, read by an small handful of people (Hi Mom).
Anyway, this is a great shot of butter. To make the rillettes you can't have it melted and you can't have it cold. Having the time to simply cream it by hand was what having free time is all about.
Posted by Robin at 5:54 PM 3 comments: