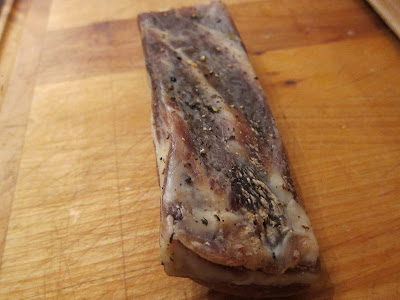 I guess I am now that person who always has home-cured pork belly on hand. It started out innocently enough: I had a 12-month old pork jowl that needed curing so I made guanciale, taking advantage of the winter weather and using a pretty fool-proof recipe. It lasted a couple months and I finished it off before it had a chance to go off. As soon as it was done I realized I should have started a new jowl already, but lacking any, I found a 13 oz slice of belly in my freezer and gave it the same treatment. Now, I have always intended to make my own pancetta but always lacked the time, or a whole belly, or the motivation to learn the proper tying of the thing. But guanciale and pancetta are basically the same thing: cured, unsmoked pieces of fatty pork, used sparingly in pastas, braises, soups or anything else that would be improved with that distinct combination of salt, meat and age. 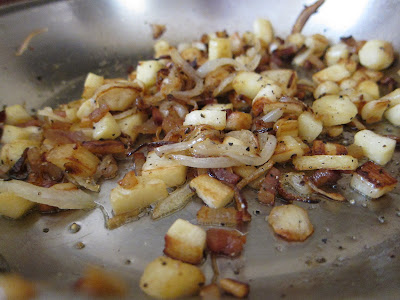 Tonight's dinner was parsnips and onion slow cooked with "my" pancetta and tossed in linguine. My homemade pancetta is more minerally than anything I've bought at the store, but allowed to mingle with heat and sugar and fat, it turns everything it touches into succulence. It also lasts longer than any commercial pancetta I've used, despite the fact that it's only cured with salt and spices, no nitrates.
Here's my recipe, which is basically Mario Batali's, with my own modifications based on absent-mindedness:
For every 1 lb of fresh pork belly--or jowl (skin removed),
1/4 C. Sugar
1/4 C. Salt
15 black peppercorns, crushed (or a mixture of black and white)
2 bay leaves, crushed
leaves from a couple branches of thyme
In a shallow bowl with lid or plastic container rub the salt and sugar all over the belly, then the spices. Cover and refrigerate for a week. The salt and sugar will melt into a brine, and you will want to turn the pork once or twice in the week. I've gone over 10 days in the brine as a result of totally forgetting about it.
After a week or so, remove the meat and shake off the liquid. If it's fall, winter, or early spring (days are below 60 and nights are colder) and you have an unheated garage, hang your meat to cure. I have no good advice on how to do it, having struggled with threading a piece of kitchen twine through the meat using a metal kebab and narrowly avoiding stabbing myself in the process. I'm sure that you will be smarter than me. I hang my meat from the bicycle that hangs from the hooks of the rafters of my garage. In the warmer weather, I will make some kind of pork hammock in the fridge. The meat needs to hang for about 4 weeks, until it is firmer and a bit darker than when you began. Again, you may end up forgetting about the meat and letting it go for 5 weeks instead, but trust yourself that you will know if has gone bad by the evidence of mold or an intolerable smell. But since I've experienced neither, you'll have to tell me about it. 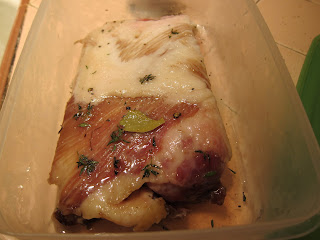 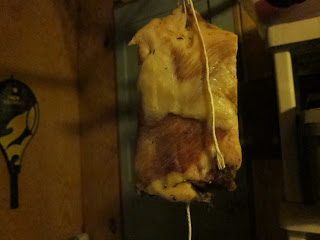 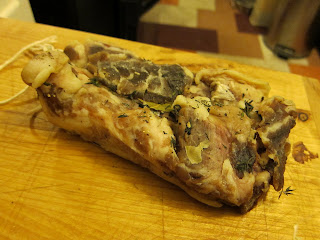 Jowl After
Posted by Robin at 8:16 PM No comments: 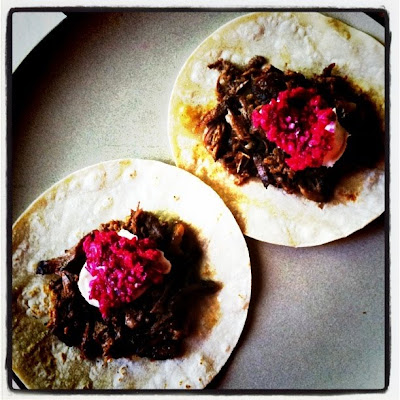 Nothing about these are remotely kosher (starting with the unholy union of meat with milk) but they were uncommonly good: brisket, slow cooked in the Jewish style, with sour cream and the homemade chrain I had made for the previous evening's Passover seder. I knew these were going to be good, but I didn't know how good. Very, very, very good.
Posted by Robin at 6:13 PM No comments: 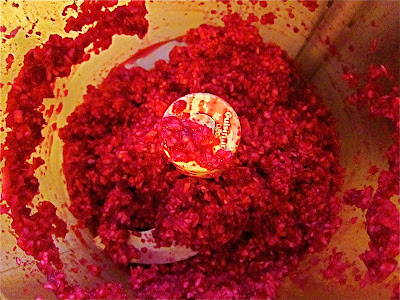 Passover was always a traumatic holiday for me because it was when I would watch my mom get high. Her drug of choice: Chrain, the so-bright-red-it-must-be-artificial-yet-it's-not condiment of horseradish blended with beets and vinegar, served traditionally with gefilte fish at a Passover seder. She would dip her spoon in the stuff and swallow. The high came fast: rivers of tears and snot flowing down her face, whooping and gasping and crying, followed by an "Oooh MAN that's hot!!", a brief intermission for cleanup, and then it would start over.
I was reminded of this traumatic chapter of childhood this evening when I started to make my own. The gentile prepared horseradish you buy for your roast beef sandwiches and bloody marys has nothing on homemade chrain. They say that fresh horseradish can vary in heat depending on the time of year you harvest it, but I have never known it to be anything less than hotter than fucking hell. I grated about 10 inches of peeled horseradish root in the cuisinart and then processed it with some of my homemade pickled beets from last summer. Before I had a chance to try it, the chrain settled into my eyes and sinuses and I was gasping for air. Seemed like a stupid thing at that point to put it to my lips, but, well you know where this is going. It singes everything from the inside, elevates your heart rate, dulls then heightens all your senses, and suddenly it's gone. And there you are, holding a spoon in one hand and a napkin in the other, sopping up your nose and moaning for mercy as you continue to sample your demise.
Posted by Robin at 8:46 PM No comments: