Bird Under a Brick 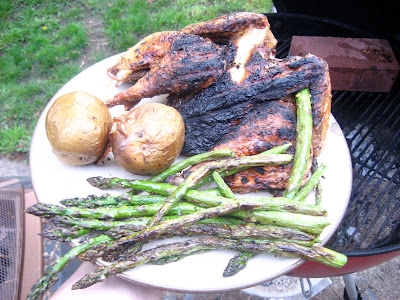 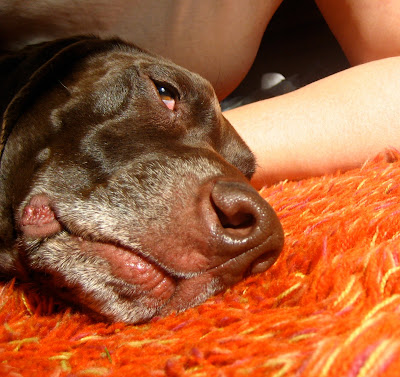 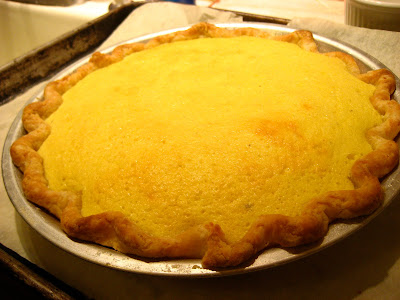 I love buttermilk and I'm not shy about admitting it. I'm not going to flaunt it the way people wear I ♥ foie gras t-shits, but if you see me pour the last 6 oz of a carton of buttermilk into a glass and drink it, I'm not apologizing.
I don't know when tangy foods like buttermilk and plain yogurt start to taste good to the palate, but for me it was around the same time that I "got" blue cheese. Now, it's hard for me to stomach sweetened yogurt and I would probably keep buttermilk in my fridge at all times if I could put it in my coffee, which is about the only reason I have milk on a regular basis. Still, for a single lady I probably have buttermilk in my fridge more than I don't, since it has a long shelf life and can be used in everything from muffins to ranch dressing to my favorite batter for upside-down cake (Joy of Cooking). I also made it an essential ingredient in my somewhat famous pie dough, so when I was baking for Half & Half I always had it in my kitchen inventory.
My guess is that there is not a professional baker out there who, when penning an dairy delivery order list, does not choose to abbreviate buttermilk to "buttmilk." There's no real economy in saving the "er", it's just more fun. And there product otherwise known as buttermilk in stores is not what actual buttermilk is meant to be; the sour liquid that remains after the fat (aka buttfat) has been removed from milk in the butter making process. Today, it's just cultured milk. Though I hope to one day, I've never had real buttmilk and I am curious to know how different it is from the substitute product. I can tell you that like regular old milk, you get what you pay for and organic buttmilk is thicker, yellower, and simply tastes better.
A few years ago I discovered a recipe for buttermilk pie in the New York Times. Buttermilk pie is similar, or possibly the same chess pie and both are varieties of pie I never encountered in suburban Connecticut. But when I started making buttermilk pie for the Half & Half, it touched all kinds of nostalgic notes in people and, from what I've been told, it was as good if not better as the ones of yore. As I type this, there's one cooking in my oven and the smell--the browning crust, the steaming buttmilk, is lulling me into a lactic trance. This one's going to the Half & Half tomorrow--only 9 days left, and a crowd of people who will want one last taste.
Buttermilk Pie
Pie dough for one 9-inch standard size pie pan
2 cups rice, dried beans, or pie weights
++++
6 tablespoons unsalted butter, at room temperature
3/4 cup sugar
2 eggs, separated, at room temperature
3 tablespoons all-purpose flour
1 tablespoon lemon juice, more to taste
1/2 teaspoon freshly grated nutmeg
generous pinch salt
1 cup buttermilk, room temperature
1 8-inch deep-dish pie crust, blind-baked until very lightly browned.

Step 1: Blind bake your crust. Custard pies always benefit from a blind baking; your pie crust gets a head-start on cooking and develops a toothsome, rather than gummy integrity that contrasts well with the custard filling.

Roll your pie dough out to somewhere between a 1/8 and 1/4" thickness and transfer to a pie plate. I like to roll the edge of the dough underneath itself before fluting to give the ends a little more thickness. Refrigerate the formed pie shell for at least an hour, up to overnight. Preheat oven to 400. Spread a sheet of parchment paper or aluminum foil over the chilled dough so that it hangs a couple inches off of the sides of the pan. Pour in your beans or rice or pie weights, and bake the pie for 10 minutes. This weight gives the dough the structure it needs for baking, otherwise the sides would collapse. After 10 minutes, remove the pie from the oven and carefully remove the parchment or foil and all of the weights. Prick a few holes in the bottom of the crust with a fork and return to the oven (without weights) for another 3-5 minutes, until very lightly browned. Let cool. Pie crust can be made several hours ahead or even the day before.

Step 2: The Pie
Preheat oven to 350. Take the time to get your ingredients to room temperature. For step one you can use an electric mixer or your own elbow grease. In a bowl, whisk together the butter and sugar until smooth and well blended. Add egg yolks and continue to whisk. Whisk in flour, lemon juice, nutmeg and salt. Add buttermilk in a thin stream until just blended. Set aside.

In another bowl, or with an electric mixer, whisk egg whites until they form soft peaks (when you pull the whisk up through the whites, they should hold some of their shape). Gently fold egg white mixture into buttermilk mixture, by hand, until just combined. Mixture will be somewhat lumpy.

Pour filling into pie shell. Bake in middle of oven until pie is the palest shade of brown and the filling is mostly firm but for a bit of jiggle in the center, 45 to 50 minutes. Depending on how acidic the pie is, it may not brown much. The slight jiggle will tell you when it's done. If edge of crust browns too quickly, cover with foil. Cool on a rack. Serve warm or chilled, with fresh berries. 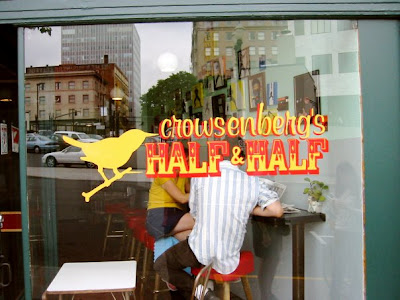 In the year 2000, before there was Whole Foods and luxury condominiums in the Pearl, a friend and I opened up a tiny little cafe across the way from Powell's Books. We named it Half & Half. We made a wren our mascot, had a taxidermy display, sold cigarettes and fluffernutter sandwiches, and didn't put out a tip jar until our customers yelled at us. We were the only coffee shop selling Stumptown coffee in a 5 mile radius. A lot has changed in 10 years. I like to think that Half & Half contributed to the food and arts culture in more ways than just making great pie and deviled eggs. We invented more than 300 sandwiches, and painstakingly named every single one. We sold coffee delivered to us by bicycle. We made iced sweet tea for all you displaced southerners. We served unemployed musicians, artists, architects, students, strippers, construction workers, freaks and ad-folks with equal zeal. You can find us in a YACHT video, a Gus Van Sant movie, and a TV spot for the Oregon Lottery. If it wasn't for Half & Half, I probably wouldn't be working at Wieden + Kennedy. And now, after 9 years and 7 months in business, we are closing shop. On April 30th, we will make our batches of deviled eggs and iced coffee and we will say goodbye to a community that helped create some of the best 500 sq feet the world has to offer. Half & Half could not have existed in any place but Portland, in any time but the last decade, and without the customers and staff who supported and sustained it.

In the next 2 weeks, I hope you have the chance to eat or drink there for your first or last time. On April 30th we're taking customer portraits outside the cafe and we'll be making sandwiches, deviled eggs and serving Miller High Life until we run out of inventory. We have the space till midnight, so let's see what happens.

Courier Coffee Roasters will be taking over the space at 923 SW Oak. We've been serving Joel Domreis' hand roasted, bicycle-delivered coffee since 2007 and I know the neighborhood is in excellent hands.

My Mother is Coming to Visit

For the first time in 2 or so years, my mom is coming to visit me for a spell. I'm excited about this; she's spirited, funny, loves to eat and drink, and will take my dog for long walks. I'm also dreading it, because she's psychotically neat and organized, and the opposite of laid back. I've spent the last month on a self-imposed 'cleaning protest' while simultaneously worrying about how much effort it will take to get my abode up to Betsy standards. A minor ankle sprain last week eliminated the weekend cleaning push, and the reality is that if I took a week off of work, there would still be a grease patch behind the washing machine that wouldn't go unnoticed. Now, with one evening before touchdown I've made my best effort to vacuum the dust bunnies and make my home habitable for more than just a dog and cat. But Betsy's white-glove test, I will not pass.
So I have to live with the fact that I am not going to get an A for tidiness. Where I can redeem myself, however, is in the kitchen. Tonight I'm braising short ribs in onions, fennel, carrots and red wine. They will be even better tomorrow after they've rested overnight, and after I've picked her up from the airport, I'll reheat with more carrots (the braising vegetables strained) and whip up some coarse polenta with parmesan. Not sure we'll bother with dessert, there will be plenty of eating to get in over the weekend. Whether or not I feel the sting of a mother's disappointment upon discovering cobwebs in the eaves of the entrance, it's a comfort to know the visit will start out on the right food, I mean foot. 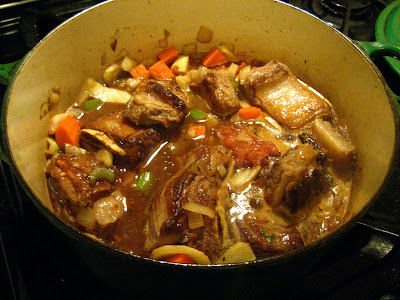