Oh boy. I've done it again. I've let days become weeks become almost months. My commitment to not over-committing myself in the wake of Half & Half's closure has resulted in a moratorium on writing and a very basic diet of fritattas and pasta dishes inspired by the markdown aisle of my refrigerator, which is to say, not very inspired. Portland's shitty weather combined with an impulsive order for 3 cubic yards of compost has had me toiling in the garden when it's not raining, and not doing much of anything when it is.
But all that is about to change. For one, the weather has finally turned a corner and it looks to be fairly safe to grill for the next few months. Also, my CSA from Gathering Together Farms has started back up again that means every week is like a game show where the challenge is to get through to the bottom of the vegetable bin without a wilted cucumber. Thirdly, I am partnering up with Laura Ohm and John Grochau for the third annual La Musette.
Laura and her husband Fred launched La Musette in their backyard 3 years ago. The premise was thus: serve a 6 course French dinner, with wine pairings, whilst watching highlights of Le Tour de France. The evening's menu would be based on what particular stage of the race was happening at the moment. La Musette ran 3 weeks in a row and one could choose a dinner based on convenience or province. This year, Laura asked me to cook with her and we quickly decided to do a 3 night blowout rather than a 3 week marathon. Also, rather than choosing a regional menu we decided to let Le Tour itself be our menu: starting in the Netherlands and ending in Paris. I'm excited. I'm also nervous. It's been so long since I've cooked for 50, and I've never pulled anything like this together before. But it's been too long since I've done anything out of my comfort zone so let's go.

First, Rotterdam to Brussels (Stage 1): Mussels in ale with mayonnaise and grilled baguette. 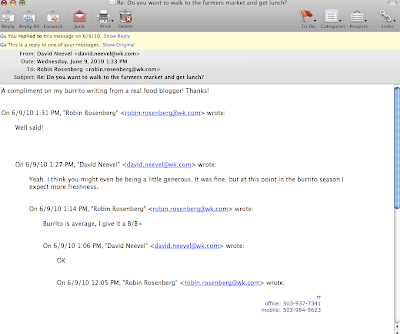