I just spent 4 days and 3 nights at the Oregon Coast. Most of it by myself (& Victor), with the objective to get ahead on some writing projects. That didn't happen. Instead I finished 2 books and started the Keith Richards autobiography. I also lost my phone, and that was maybe the most eventful moment of the weekend. Last night, my friends David and Frosty came to the beach after shooting guns in the mountains. I made Guinness beef stew and we drank a bottle of Woodford Reserve that I got in a trade for a pound of coffee beans.
This morning I made chilequiles with leftover corn chips, some eggs, random vegetables and a can of El Pato. El Pato salsas are among of my favorite prepared foods in the world, up there with Hellman's/Best Foods mayonnaise; and you can find it in just about any west coast grocery, including the little market in Manzanita. These were not the best chilequiles I've ever made. I think I prefer to fry up stale corn torillas rather than use chips, and the choice to use Kettle Foods whole grain probably didn't help. Still, when served in this beautiful Dansk paella pan with some broiled cheese, nobody's a critic. 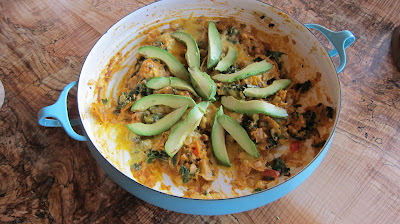 Way back in the 90's, I met this guy at my local bar. We exchanged numbers, and ended up going out for a movie and some drinks. He was a waiter and a musician, and I liked him because he was very cynical. He was very gentlemanly and attentive. I can't remember if we went on one or two dates but he asked me to go to a Jazz concert with him on what happened to be Valentines Day. woah. I offered to make dinner before the show. I was making Marcella Hazan's Hunter's Chicken (fricasseed chicken with wild mushrooms and a little tomato--ok, it was Chicken Cacciatore) when he called to tell me he wasn't going to be able to go out. He told me he suddenly got called into work. Then about 20 minutes later he called back. Of course, you would think, as I had hoped, he was calling back to tell me he got someone to cover his shift. Actually he was calling me back to come clean: he was also dating another woman, who apparently had won. Him being the prize. I left my apartment and went down to The Vern (my local) and got drunk with the regulars. Someone had strewn candy conversation hearts all over the bar and with a very fine felt tip pen, I began writing every cruel and crass letter combination that I could fit over the centimeter-wide confections. Later I took my hot glue gun, affixed them to a black doily heart and had it as a wall piece for awhile. The next year, or maybe the one after that, I had met at a Christmas party about 2 months previous. He was a graphic designer and possibly one of the grumpiest humans to walk the earth, and that was pretty appealing. Now I am trying to remember things that I purposefully blocked out, so forgive me; I think I sent him a card and invited him to a play that I was in. He didn't come to the play, but we did go on some dates, and had what I thought was great chemistry, and right before Valentines Day he took me out to tell me he was not going to be able to see me any more. No other woman this time, it was just me. That year, my 2 housemates and I threw a Valentines Day party (why?). Spurred by S_______'s humiliating rejection, and inspired by the candy hearts that S________ inspired, I mixed up some sugar cookie dough, frosted some hearts with colorful fondant, and worked out my rage with a tube of royal icing. 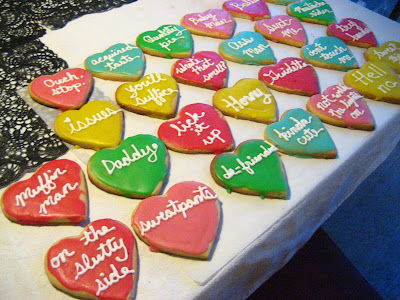 This is the first year in over a decade that I did not make my signature Valentine's Day cookies. When we opened up Half & Half they became a showpiece and a labor of love, and sometimes just labor. My kitchenaid mixer broke awhile back I haven't replaced it. It sounds implausible that I could go that long without one, but my will to procrastinate is very, very strong. I thought it would be a relief to take a break this year, but it feels a bit like phantom limb.
Posted by Robin at 7:11 PM No comments:

I've been putting off the "Super Bowl Sunday Blog Post" for a few nights now. Maybe because writing about it means that football season really is over and I have to wait 8 months before MNF and my nascent education of the game resumes, for I am like a bud only starting to blossom. Perhaps this signifies a bigger sea-change for me; March Madness isn't far off.
I was worried about the Super Bowl menu being too redundant: Polish-American fare from one cold winter climate meeting German-American fare from a colder winter climate results in plenty of and possibly too much meat and starch and cheese. But as I sat down with the task of really getting to the regional specialties (or at least in my fantasy world), I was able to design a menu with both subtle contrasts and harmonies. For the first of 3 courses, we had Wisconsin beer cheese fondue made with cheddar, comte, a touch of worcestershire and a can of Hamms, my favorite domestic beer. The secret to making a smooth "American" style cheese fondue is to whisk in some flour or cornstarch while it's melting, and whisk the shit out of it until it's uniform. This will keep the fat separating from the liquid and probably keeps the fat from exiting your body once consumed. This was served with chunks of light rye and grilled kielbasa. Laura also brought the makings of a Wisconsin cheese plate with limburger, liverwurst, pumpernickel and pickled herring. 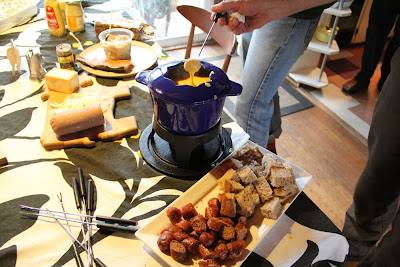 To represent Pittsburgh in the starter category, I made a tray of Primanti Bros-style sandwiches. When I first heard about these, I thought, "Where has Pittsburgh been all my life?" because though I have been putting cole-slaw and french fries in my sandwiches for years, to do this commercially seems heaven-sent. I lifted a recipe from a local Pittsburgh paper for the authentic coleslaw recipe (sweet and vinegary) and just made frozen french fries ("fast food" thin-style) and used the house-cured honey ham and smoked beef from Edelweiss deli, as well as provolone, a touch of mayo and good old yellow mustard (the last two ingredients probably inauthentic, but they felt right in the moment). As expected, these sandwiches did not disappoint. 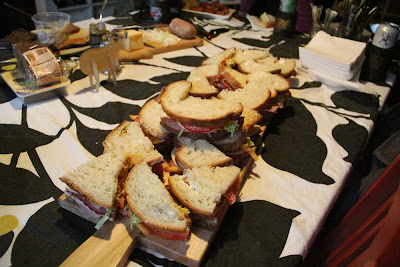 Two guests reportedly dipped their Primanti sandwiches in the fondue. Had I followed suit, I might not be alive today. We ate the first wave of food with the knowledge that there were two more courses on their way, but hindsight is 20/20 and it really did no good. By halftime the heartiest eaters were starting to panic over the lack of expanse left in their stomachs. Fortunately, Wisconsin and Pennsylvania's finest cheap beers seemed to help. While the Black Eyed Peas put on one of the worst half-time shows in history, I grilled some brats and fried up pirogies. 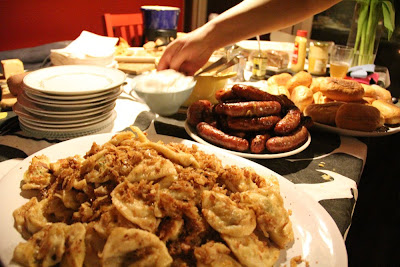 The brats steamed slowly in beer and onions for about 2 hours prior. The pirogies were filled with mashed potatoes, melted onions, cheese and sauerkraut. House Special. I filled and cooked them earlier that day and then pan fried them with more caramelized onions and bread crumbs. Believe it or not, I also managed to watch the game, which by all accounts was pretty good for a Super Bowl. It was over before anyone was ready for more food, but dessert didn't care. Laura made a rhubarb-raspberry fit for a Wisconsin Junior League cookbook and Piper brought the makings for banana splits, which were invented in Pittsburgh. Neither I nor any photographers were sober enough to capture the dessert. An alka-seltzer, some strong coffee and a little post-game air jam-band helped with the overall sensation of drowning in food. This week has been all brown rice and vegetables. 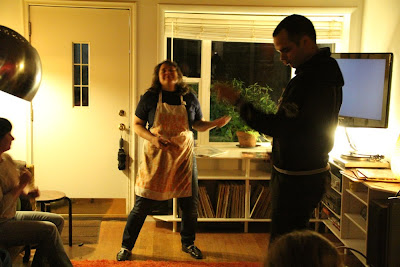 This past weekend was the most intensive 2 days of cooking that has passed in awhile. On Saturday we celebrated David Kennedy's birthday in grand fashion: with a baked potato/ salad bar party. In case you think that might sound either antiquated or boring, please observe: 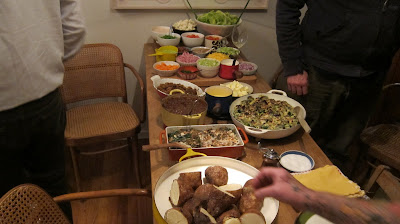 This included your usual salad bar vegetables, bacon, chopped ham, cheese, cheese sauce, broiled broccoli in cheese sauce, creamed spinach, curried mushrooms, Vern Chili, sour cream, butter, and homemade ranch, 1000 island and green goddess salad dressings. This was actually more Storm and Mike's production, as hosts and art directors of the event. I made my famous chili, the mushrooms, and 2 cream pies: banana and coconut. Though the coconut went first, and was more structurally sound, banana is always my preference. My BCP, developed back in the Half & Half days when I was toying with opening up a pie shop, has brown sugar in the custard and a gingersnap cookie crust which gives it a subtle toffee-ness without becoming a cloying banoffee affair. At the moment I am without a stand mixer, and my handheld does not achieve the kind of power needed to get a truly stiff cream. Nevertheless, I managed to get a pretty portrait of BCP: 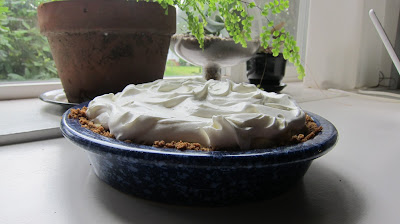 I would have taken more photos from the birthday but David hijacked my camera and had himself a photo shoot without noticing the low battery light flashing.