I'm a little obsessed with nachos, you could say.  It wasn't always that way.  I'm sure I liked nachos as a kid but they didn't trump, say, stuffed potato skins or good old Ruffles and onion dip as a coveted party food.  It wasn't until I was just about 30 that I "started seeing" nachos, and all the possibilities that they held, suddenly and completely.  Almost overnight, I wanted nachos ALL OF THE TIME.  I wanted good nachos with freshly fried tortillas and homemade salsa, and I wanted shitty nachos with stale chips and lukewarm processed cheese.  I started ordering nachos at any restaurant that served them.  Even places where I may have been "burned" before with inferior ingredients or poor nacho composition would see me ordering nachos again, in the hope of redemption and the insatiable hunger for the perfect chip.
I have been on a quest for the best nachos in Portland since and I take no pleasure in saying that I've found more bad than good, but there are some gems out there and I'll take the opportunity to tell you about them in a later post.
These days, I'm quite fond of the Nacho Party format.   Several years ago I suggested this for my friend David's birthday. There we had $100 nachos (fancy ingredients), spa nachos (baked chips, lots of yogurt and lettuce) and hamburger nachos (ground beef, American Cheese, ketchup, mustard and relish.  quite good) among others.  A year or so later I decided I really wanted to explore Nachos further and I held my own "It's Nacho Birthday" event, only this time it was a competition, and I was the sole judge.  The goal was simply to get as many people as possible to make many different kinds nachos, just for me.
The Categories Were:
Classic Nachos
World Beat Nachos
Krazy Nachos
Dessert Nachos
and
Local, Seasonal and Sustainable Nachos. 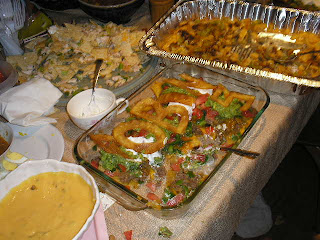 this picture is a little out of focus but from left to right we have:  Southern Nachos (Category:Krazy. Ingredients: potato chips, chicken strips, country gravy, tabasco),  Classic Nachos, and Classic Nachos with a nice touch: "Robin" spelled out in fried Tortilla.  The bowl of yellow is hot queso for Stadium Nachos. 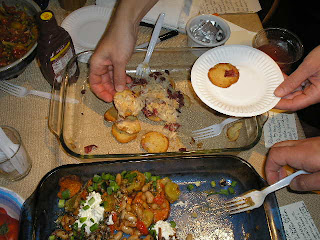 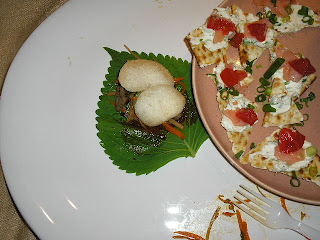 Left to right we have Korean and Jewish nachos.  The Jewish Nachos are, naturally, served on matzo with cream cheese, lox, tomatoes and scallions.  Julia made the Korean nachos with sesame leaf, some bulgogi beef, kimchi and shrimp crackers.  Delicious.  There were many outstanding nachos at this party including Irish Nachos, Traditional Stadium Nachos, several dessert varieties and a really stellar offering in the "local, seasonal, etc..." category with handmade tortilla chips, locally raised pork, fresh corn, roasted chiles and Oregon cheese.
The party was success but there was room for improvement.  I have to admit that being the sole judge was more of a burden than an abuse of power.  Next time, I recruit a panel.  By the end of the night I thought possibly, once and for all, I sated my craving, but can the powerful combination of contrasting textures and flavors--the crunch, the chew, the unctuous ooze, the salty the tangy, the sweet and spicy--ever be enough?  There is a whole world of nachos still ripe for exploration, and I intend to bring you on this journey.
Posted by Robin at 1:49 PM