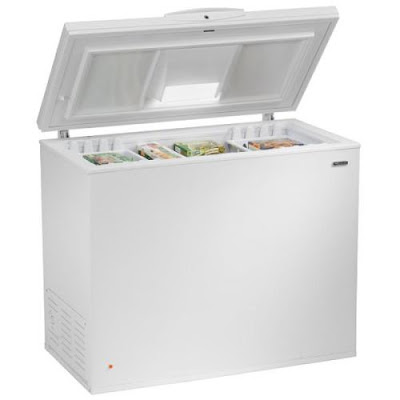 Between my dog food production, my bulk meat purchases, the produce that I freeze in the summer, the frozen domestic squid I like to keep on hand for spontaneous calamari, the organic chicken I buy only on clearance, and the random hot dog buns that get left behind after a cookout that I can't bear to throw away, I had to upgrade to a bigger chest freezer. The one pictured above is my new model--8.8 cu ft and ready to party. Landing on this one was not an easy decision. Do I get a second 5 cu ft to match the one I already have? Go with a really ample 12 or 13 cu ft model, which could hold a few extra months of dog food or an additional elk? In the end, I made the conservative decision: upgrade to a model nearly twice the size of my original, and sell the old one.
I declined the $60 delivery charge and asked 2 muscular male friends, one with a van, to help me with the freezer transport. As with most things, I used food an an incentive and promised them a hearty breakfast if they would show up at my house on Saturday morning, head over to the Sears Warehouse, pick up and install the freezer. I got up early this morning and made this for breakfast: 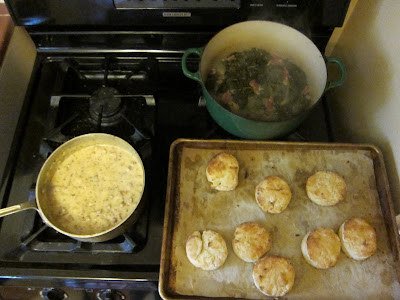 Clockwise: Greens with ham hock, buttermilk biscuits, sausage gravy. Not pictured: slow-cooked scrambled eggs.
As it turned out, David's van wouldn't start. Suddenly, my day was in peril, since I had to pick up a half lamb and 85 pounds of ground beef by noon, and no vehicle with which to pick up the freezer. At the moment when everything was falling apart, my friend Matt came by with his dog and kid. We looked up the measurements of the freezer and realized it would in fact easily fit in my Volvo wagon. Duh. The rest of the story is boring: I picked up the freezer, Matt helped me get it in my garage, I fed him the biscuits and gravy. In retrospect, I think I could have pulled off the entire thing by myself, it's just nicer when you can ask someone for a favor and repay them with something you make. Incidentally, this meal used up the last of my 2009 sausage, a ham hock from 2008, and a half-cup of homemade lard went into the biscuits. A pork trifecta.
Posted by Robin at 12:42 PM