happy birthday to me 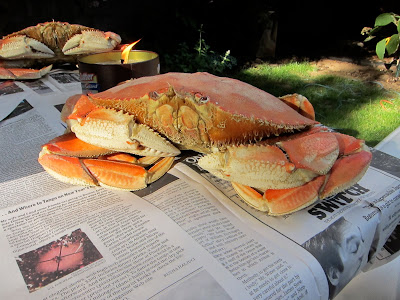 Birthdays are usually an easy set up for disappointment. Every year after you turn 21 is a battle between not wanting to make a fuss and basking in the illusion that special birthday magic belongs to you. I have, more than once, intentionally eschewed plans because I was convinced someone was going to throw me a surprise party. This year, 38, was on its way to fitting perfectly in synch with the past when the opportunity to combat apathy came in the form of a crab feed. 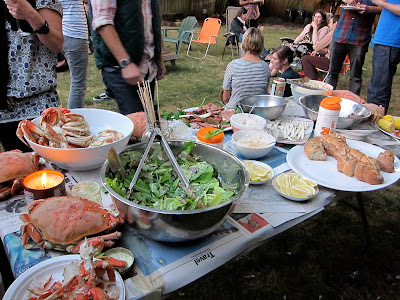 A week ago, I got a call from Sunni Liston, who runs the Dogpatch Resort and whose husband, Rick, spends weekends trapping crabs and catching halibut. It has been another banner year for Dungeness off the Oregon Coast, and Rick and the boys have been catching more crabs than they know what to do with. Sunni wanted to know, if Rick were to bring in say 60 crabs over the weekend, would I like to have a party on the roof at work on Monday the 30th? Well yes, of course, but no, because it's one thing to throw a party at work with a giant surplus of crabs, but another thing to throw such a party at work on your birthday. At least it is to me, who vacillates between seeking and avoiding attention on a minute to minute basis. And I see my non-work friends too little as it is. So to hell with the W+K roof: I told Sunni to bring the crabs to my house on Monday, invited 50 or so of my closest friends and co-workers, and announced we would raise money for Sunni's Angel Fund: veterinary care for the animals of the homeless. 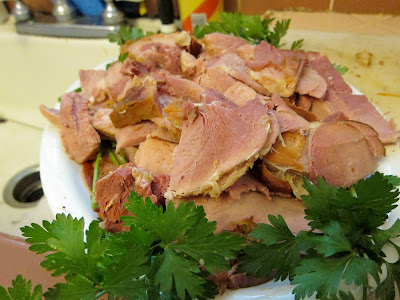 At first, it was just going to be crab and wet-naps. Then I remembered that I still had quite a bit of ham in my meat freezer, so it was simply a pork-and-shellfish menu: right up my alley. At the last minute I decided to round the meal with corn on the cob and coleslaw (Thomas Keller's Ad Hoc recipe: flawless). People brought beverages and desserts. We ate, we drank, we raised over $300 and we were all asleep by 11pm. Could not have planned a better way to spend my birthday, even if it meant making plans. 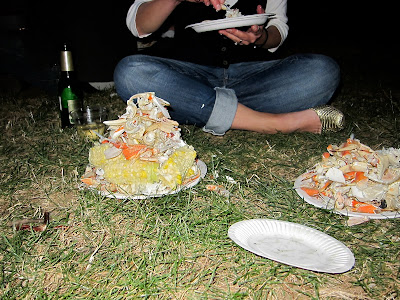