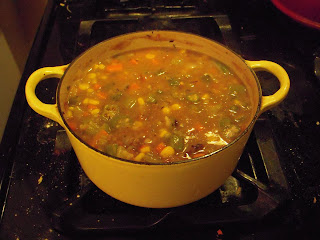 I often prefer to have a (nearly) empty fridge to a full one, for the sheer thrill of making something out of practically nothing.  Since a few posts back oh so many months ago, I've been doing the boring old routine of moderate diet-and-exercise to the tune of being down about 5 pounds, but more severe than limiting intake of food has been limiting my expenditure of cash.  I am incredibly grateful to still have a job but I've steadily been living slightly above my means ever since I paired down to a one-person (one dog, one cat) household.  Currently, I have a $15 dollar-a-day food budget.  The last year and a half marks the first time in my professional life that I am not surrounded by free food and beverage all the live long day.   Although technically I can still eat and drink for free at Half & Half, I choose not to abuse that privilege too much, mostly because I tend to piss off Jeff and the staff seem to fear me.  The reality is $15 doesn't get you very far for breakfast, lunch and dinner if you don't do at least 2 of those meals yourself.  If you manage to curate a good pantry, stock your fridge with the basics and shop with a modicum of a plan, you can still enjoy a few great meals out every week.  I inevitably end up going over my budget at some point, but the fact that I'm tracking means I probably don't up as deeply in the hole as I would otherwise.
Anyway, tonight's challenge was: make something with the perishable leftovers in the fridge which included:
-taco meat from the superbowl (previously frozen, thawed for last night's Ladies Nacho Night, but not all eaten)
-beans from Ladies Nacho Night
-rice from beans-and-rice-taco-salad (?) lunch
-half a tomato 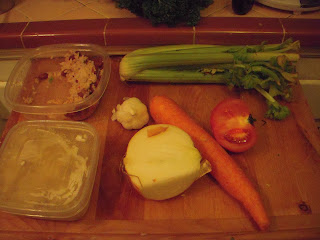 The challenge: Nothing Mexican.  I've kind of had enough of tacos and nachos lately, I'm shocked to admit to myself.   It's still the middle of winter.  The economy is scary.  I have too much work to do.  Soup is the restorative answer.  And not a taco soup.  I settle on riffing on gumbo, something I've never made before.
I am hard pressed to think of a cuisine I don't like.  There are a couple though, that I am almost indifferent towards, and that is Ethiopian and Cajun.  I won't diss them, but I will usually opt for Chinese instead.  For some reason however, whether it's a renewed sense of patriotism or my maiden discovery of creole flavors, I've "started seeing" gumbo.  First, it was looking for something to do with a shitload of okra in my freezer.  Then, it was a piece on a famous Cajun home cook in the NY Times Magazine, and soon I was open to the idea.  Tonight's bounty gave me the excuse to take a stab at it.
Carrots, onion, celery and garlic were thankfully on hand.  As was some  chicken stock, which I now always have in the freezer thanks to my monthly duty of making dog food that always yields a few quarts of the stuff.
I started with a roux: 1 T. canola oil and 1 T. flour.  Never before, at least in memory, have I actually made a dark roux, the kind that takes on color and actually smells nutty.  I pretty much limited roux for bechamel and occasionally the backbone for a soup, but I've never spent much time coaxing the flavor from the marriage of fat and flour into something other than a scientific property.  Maybe one of the reasons I've never cared for Cajun (is creole a different cuisine? must look into that) food is that I've just never had good Cajun food? In any event, I cooked the roux to a nice toffee brown for about 1o minutes while chopping my onions, celery and carrot.   I added those and after they released some aromatic aroma I threw in some thyme (dried), half of a tomato (diced) and garlic (minced).   I allowed this to cook a little longer and then added my chicken stock...in one frozen chunk because I was too lazy to use another pot.  No difference, just melt the stock at a lower temperature at first and count on it taking longer.
Once the stock melted and heated I added the rice, beans and beef.  Have to admit I wasn't planning on using the beef originally, but threw it in on a whim knowing it could make or break the soup.  Sure, some Andouille sausage would have been nice, as would some shrimp or confit duck, but the whole point was to make it work with what I had, and use up as many perishable goods as possible.  After that reached a boil I added some okra (frozen, sliced) and corn (frozen):  my freezer is an equal opportunity forum for using leftovers.  A teeny bit of tamari soy sauce to give it the umami that would have been delivered in the sausage.  A pinch of salt. Generous grindings of black pepper and as a finishing touch, about 3 Tablespoons of leftover salsa (Herdez brand, comes in a can, it's better than $8 fancy salsa).   The results?  A little bit spicy, pretty hardy and legitimately good.  I'm especially fond of the corn and okra aspects, and of course the broth.   And my net cost on food for today and through lunch tomorrow will be $0, which means I can go crazy somewhere else in the week.
Posted by Robin at 8:19 PM